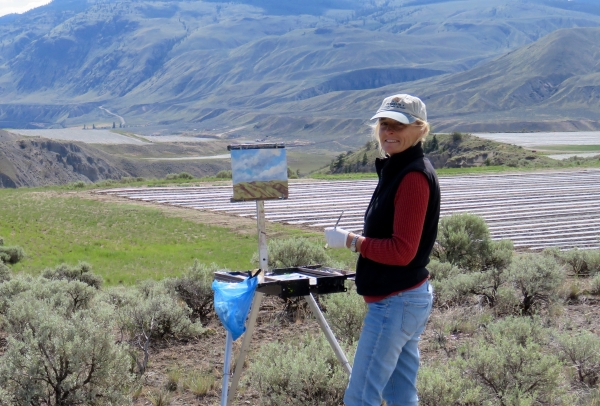 Deborah Czernecky calls Canada her "Big Back Yard".  She has had a life long passion for nature, especially it's spirituality and paint.

Deborah Czernecky is an established Canadian Artist who is an Elected Member of the Society of Canadian Artists (SCA) and an Active Member of the Federation of Canadian Artists (FCA).  Having traveled widely from western to eastern Canada and across the awe-inspiring Canadian North, Deborah calls Canada her "Big Back Yard".  She has also painted in the USA and further abroad in Europe and Central America.  The varied scenery Deborah has encountered has heightened her sense of formation, colours and patterns in the landscape.

Deborah grew up in an artistic family in the interior of British Columbia developing a life long passion for paint and nature, especially its spirituality.  While primarily an "en plein air" painter, she has produced a diverse body of work ranging from the raw power of the majestic Canadian Rockies to the serenity of an early "Morning Row"in the mist of the lake, (selected by Ducks Unlimited for its 2018 Art Portfolio), from the ghostly aura of medieval Templar chapels to the enthusiastic joy of colourful bicycles in Costa Rica.  Whether painting on location or in the studio, Deborah combines her dynamic palette with elements of abstraction and traditional realism to convey the essence of the subject matter.

Society of Canadian Artists Elected, since 2009.

Colwood Art Network, Past Board Member,

Metchosin International Summer School of the Arts (MISSA), Board Member, 2007-2013,